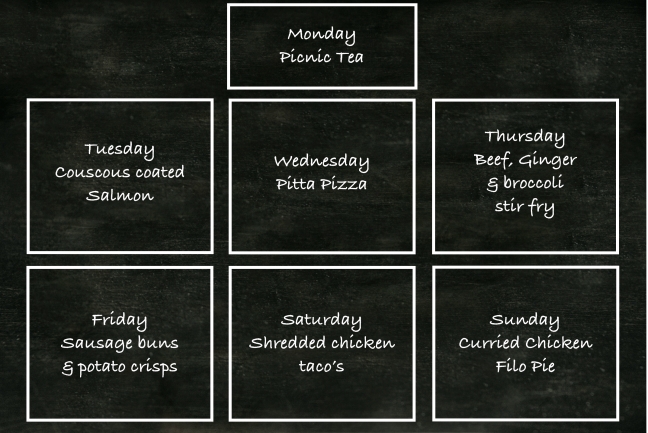 Another week flies by! It’s crazy how quickly this term is going…but if you’re also feeling like time is whizzing by and you barely have time to think then fear not as I have yet another weekly planner to help you so you at least that’s one less thing to have to think about!

Particular faves this week  – Alfie loved the couscous coated salmon and I even popped one cold into his lunchbox (see pic below) and he ate the whole thing so this was a winner in our household and easy too! Maisie’s fave was probably the curried chicken filo pie..she was literally scraping the plate clean! The filo pastry can also be used to make filo quiches which are also fab for picnic teas and lunchboxes!…see below

Egg filo quiches are so easy to make and are great for picnics, lunchboxes and breakfast! You can make these in advance and then simply pop into the oven for 5 mins to refresh and crisp up the filo… 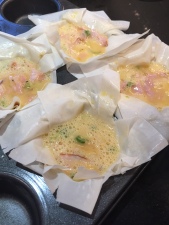 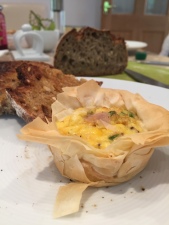 For your filling: Whisk 4 eggs in a mixing bowl and then add a splash of milk (I use oat milk) some salt and pepper and then fillings of your choice into a bowl and mix well. The ones above are filled with ham and spring onion but you can use a heap of different fillings…chorizo and pea, mushroom and ham, cheese and chive, red pepper and feta…..

Once you’ve made your filling, leave this aside and now grab yourself a muffin tin and some filo pastry. Lightly grease your muffin tin.

Now cut the filo into small squares just large enough to cover each hole. Brush one square of filo with some melted butter and then gently push into a muffin tin, then do the same again with another square of filo and place over the top and repeat once more so that you have three layers of filo in each case. (see first pic) Make sure there are no holes. Then add the egg mixture and bake in the oven for 20 mins or until the egg is set and the filo crispy.

I followed this recipe: Couscous coated salmon but instead of spicy couscous I bought some lemon and coriander couscous and made this according to the packet instructions, then you simply cut some salmon fillets up into fingers, dip into flour, then egg and then the couscous and pop into the oven! I served with some mangetout, broccoli and some roasted cauliflower…I also used this in Alfie’s packed lunch with some noodles (see pic)

Wednesday – Pitta pizza. An easy, quick and interactive meal for the kids to make. This one is good for playdates too! Get a load of toppings and let your kids choose and load up their pittas!

I would suggest grilling one side of the pitta first and then take out, put some tomato puree or tomato sauce on the base, load up with toppings, top with cheese and then pop back under the grill to melt the cheese…easy! Here’s Maisie using some dairy free cheese which we tried for the first time. She ate it but I wouldn’t say she was crazy about the cheese and would probably have been just as happy without..

Thursday – Beef, ginger and broccoli stir fry. Again this is a fairly simple and quick meal to cook and prepare. Get your kids to choose some of the veggies which go into it, that way they’re more likely to eat it! I bought some really fun chopsticks (from amazon) which makes eating stir-fries all the more fun!! 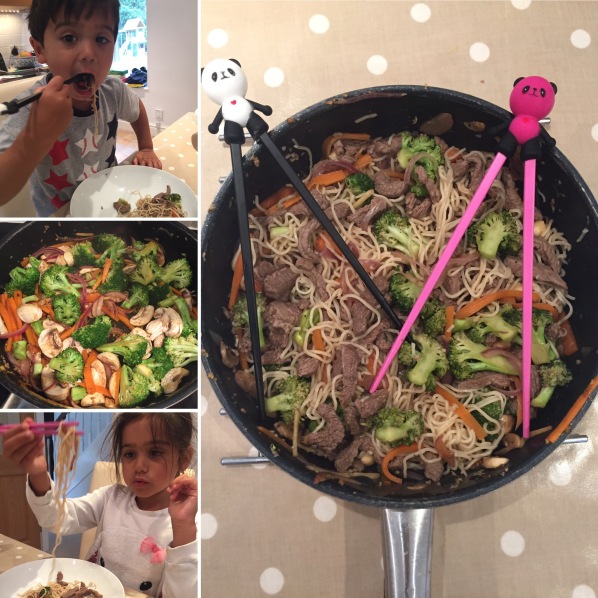 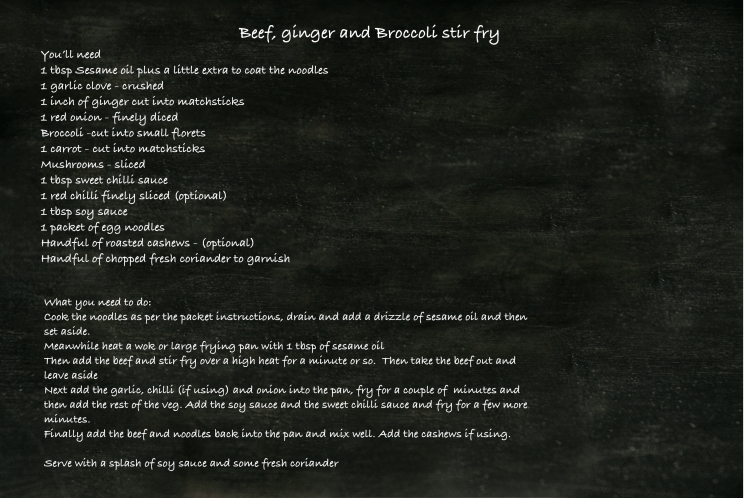 Cut the potatoes into rounds about 1/2cm thick and then place flat on a baking tray with some oil and a bit of salt (go easy on the salt if feeding really young ones!) Pop into the oven for about 25 mins or until crispy. Turn half way through. You can pop the sausages in at the same time and even use the same baking tray if you have space to save on washing up! Then pop the sausages into some buns and serve with some green veg. I had some leftover homemade humous here but ketchup did also make an appearance!!..Simple Friday dins!

This is another DIY meal to get the kids involved. I have found, especially with Alfie that if he’s involved in the cooking process he’ll be way more likely to try something. He’s fussier than Maisie was but he’s getting SO much better and way more experimental!

So: Place 6 boned chicken thighs with skin on, onto a baking tray, season the chicken with salt and pepper and add some smoked paprika. You could also pop some lemon wedges into the tray as well…Simply bake in the oven for about 30 mins. Once cooked use two forks to shred the chicken off the bone.

Serve this with some homemade humous, soft tacos, lettuce, cucumber and tomatoes and let the kids load up!

This was a fave with Maisie who literally scraped the plate clean!

I used a recipe from Sainsbury’s: Curried chicken filo pie I switched the plain flour to wholegrain flour and the butter was dairy free and the milk used was rice milk so this can be completely dairy free if you need it to be! If you have any leftover chicken from the taco’s night you could throw this in as well..and as above any leftover filo can be used for filo egg quiches – no food waste here!!!